The picture in the following article contains a number of people who were part of the outstanding team who performed the MRI Focused Ultrasound procedure on me:

Charlene Aldrich – who was beside me the entire time except when the sonications were happening; Dr. Howard Eisenberg – the neurosurgeon; Dr. Paul Fishman – the neurologist; Dr. Deeraj Gandhi – the radiologist; Pam Janocha; Erma Owens; Mor Dayan – Insightec (not pictured)

There were others. As a result of the Ativan and many things occurring simultaneously, I was not aware of them.

Everybody acted professionally and as a team!

University of Maryland Center of Excellence Dedicated to Brain Research

In recognition of their leadership in advancing focused ultrasound research for the brain, the Foundation is pleased to designate the University of Maryland as a Center of Excellence.

The Chair of the Department of Neurosurgery, Howard Eisenberg, MD, and Chair of Diagnostic Radiology and Nuclear Medicine, Elias Melhem, MD, are managing a comprehensive bench-to-bedside program expanding the technology’s neurosurgical capabilities as well as innovating new methods for delivering therapies to the brain.

“The University of Maryland has created a dream team of experts in neurosurgery, neuroradiology, neurology, and biophysics that is collaborating to establish new frontiers to optimize the technology to treat a range of neurologic and psychiatric disorders,” says Foundation Chairman Neal F. Kassell, MD.

Both Eisenberg and Melham have a long-standing interest in focused ultrasound (FUS). Dr. Eisenberg had served as a consultant to the Foundation for over a decade. Dr. Melhem initially became aware of FUS when he was at the University of Pennsylvania and heard Ferenc Jolesz give a talk about 10 years ago. “This really captured my imagination for the potential of the technology,” says Melhem. He was not able to obtain a system at Penn, but as he was being recruited to be Chairman of the Radiology Department at Maryland in 2012, he solicited support from the Dean of the School of Medicine to invest in creating a hub for focused ultrasound research. Since then he has invested in an Insightec Exablate clinical platform and basic science systems. The Departments of Radiology, Neurology and Neurosurgery have collaborated to create a multidisciplinary team of experts that has attracted more than $500,000 in research grants to date and laid a pipeline for future funding.

Maryland has been a top site for recruiting patients into essential tremor (ET) and Parkinson’s disease clinical trials through the leadership of Drs. Melhem and Eisenberg, along with neurologist Paul Fishman, MD, PhD, and research coordinator Charlene Aldrich, who is credited for being an extremely effective ambassador to the patient community. The FUS clinical center at Maryland is conveniently located within the hospital with a new dedicated MRI scanner, its own prep area, waiting room, and recovery area.

“It is very fulfilling to be able to provide a less invasive option for patients – some just don’t want an electrode put into their brain,” says Dr. Eisenberg. With his neurophysiologic training, Dr. Fishman is a valuable member of the treatment team. He assesses patients and collaborates on the brain mapping before procedures, evaluates patients with each sonication, and afterwards conducts the follow-up visits.

Now that the Exablate system is approved to treat ET, the team looks forward to treating patients commercially. “We want to collaborate with other sites so we know where patients from certain regions of the country should go for treatment,” says Eisenberg.

The team is also looking forward to pushing the boundaries of ablation for movement disorders. “Now that we have established a foothold for unilateral ET, we want to expand the beachhead to explore treating the second side and retreating patients who may lose the effect,” says Fishman. “These questions are even more vital for Parkinson’s because the disease is commonly bilateral and more progressive.” See his July 2016 Foundation Webinar on Research Progress in Parkinson’s Disease and a Role For Focused Ultrasound.

There is agreement that a global registry is needed so sites can utilize common protocols and share insights into issues such as what types and symptoms of Parkinson’s are best served by ablating certain targets. “That is where the clinical research is heading, and it is very exciting to be on the leading edge of making these determinations,” says Fishman.

Breaking Through Barriers to the Brain

Dr. Fishman is a bridge to the scientific team at Maryland. After decades in the lab developing experimental agents for neurodegenerative disorders, he collaborated with neurosurgeon and scientist Graeme Woodworth, MD, FUS biophysicist Victor Frenkel, PhD, and others to optimize the use of focused ultrasound to breach the blood-brain barrier (BBB) and deliver these types of therapies.

The team is making preclinical progress on drug delivery to the brain along several fronts. They are opening the BBB with FUS and utilizing magnets to direct magnetically labeled stem cells to targeted areas in the brain. Dr. Woodworth is working with the FDA to get clearance for a clinical study that would use FUS to open the BBB to deliver a dye to improve visualization within a brain tumor and to determine how deep small molecules can penetrate the brain.

“FUS could become the first clinically versatile way of introducing this enormous backlog of therapeutics that do not cross the blood-brain-barrier,” says Fishman. “If it works, this could alter the scientific and clinical landscape for treating the brain.”

Dr. Frenkel, from the department of Radiology, has created a custom portable system for studying FUS-mediated neuromodulation and is assessing how altering the microenvironment of the brain affects the inflammatory response and the movement of nanoparticles through neurological tissue. “There is a possibility that we can alter the natural history of some pretty devastating diseases,” says Woodworth. “We are just a year or two away from clinical trials.”

The leadership is very optimistic about the potential for the technology and the impact of being a Center of Excellence. “This recognition will help to drive awareness across other departments that will open up doors for new collaborations leading to more novel ideas and better solutions to pursue,” says Eisenberg.

“Our achievements in focused ultrasound – both in terms of advancing the science and transforming clinical care – have been recognized by the Dean and our Board of Trustees,” says Melhem. “We are looking forward to continuing to demonstrate that we are a model for excellence in the field.”

Prior to the procedure my hand most affected by ET was my right one. By the way, I am right-handed. The procedure was aimed at improving the tremor in that hand and was therefore done on the left side of my brain.

The side effects of the procedure for me were numbness in the lower lip, problems with gait/balance (I tend to go to the right) and being tired. All of them have improved since, and there soon will not be any lasting negative effects.

I was already very pleased with the results. Then I was in the meeting of the Silver Spring support group when Dave Pollack said that my voice had improved. Since then, many people including family members have said the same thing. As my voice tremor has caused me so much trouble in my life, I am ecstatic! Let me caution you however that the procedure is meant to improve only the tremor in the hand and arm. As I have said many times before, everybody’s ET is unique so there is no guarantee that someone else will see an improvement in their voice.

Overall the improvements resulting from the procedure were a lot better than I expected. 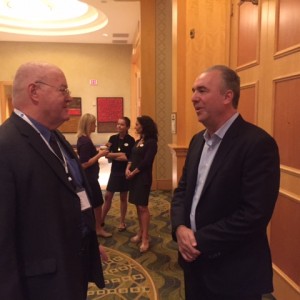 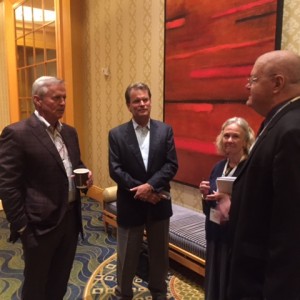 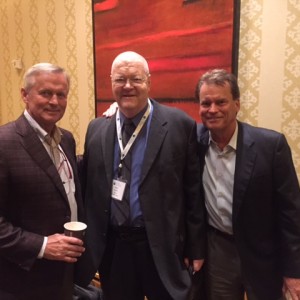