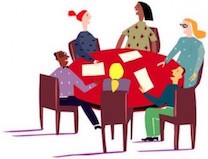 Peter opened the meeting by telling us about a new digital technology firm called NEW TOUCH, who has created an introduction powerpoint for the HopeNet community that will soon be on the website blog at thehopenet.org.

Peter said things are happening now, things are moving along. We [HopeNet] received a $10,000 check to be used for funding research here [Columbia]. We will be the test subjects for a study.

Peter told us about a conversation he had with Dr. Haubenberger who told him about a new study about how alcohol can help with Essential Tremors. Harvey mentioned that he had participated in an alcohol study for E.T. at NIH, and that the University of Maryland has a balance study.

Comments and questions throughout meeting:

Kinetic jerk as opposed to a tremor.

How does caffeine affect it?

There is a connection between cerebellum and fight or flight.

Can there be ET in the eyes? a movement disorder in the eyes. The visual cortex is involved in the loop that causes ET.

What is the biggest problem we come up against? Doctors – yes doctors.

Cranial tremor is more prevalent in women then men.

There will not be a meeting in November. We will meet again on the first Friday in December which is the 1st. The discussion will be about New Touch technology by the people from New Touch. Also, we are not funding the New Touch team.

There is no date set yet for the physical therapy study that Dr. Janice Sallit will present regarding balance and gait is. Dr. Sallit has to complete her “proof of concept” in order to get the funding for the study. Peter is working with a lawyer to put together the process & procedures for setting up the grant.

Someone asked Peter how he is coming along after being assaulted earlier in the summer. Peter said he is scheduled for 2 more surgeries on his right eye. One is to remove fluid, and the second one is cataract surgery, still no arrest.

Then we went around the room so each person can tell of any problems they are experiencing.

Mary Jane – has now developed a tremor in her left hand, still has trouble eating and uses a spoon, still has trouble writing, so she now prints when she can. She does not have any problems using the computer. She said she is open to having the focused ultrasound procedure done.

Ellie – This is Ellie’s first visit to our meeting. She said she has problems typing [double typing]. Dave suggested she change her keyboard setting to either sensitive or non-sensitive.

Harvey – spoke about the sensations he felt when he had the FUS done. He said he felt like he was elevated, with the head lower than his feet. Harvey had a newspaper article regarding a Canadian study having to do with ET.

Les – Les said that the tremors in his hands are getting worse, and so is his gait. Peter said if you walk on uneven surfaces [i.e. grass, sand, etc.] it becomes an issue for the feet to send messages to the brain, therefore causing you to have problems with your gait.

Jonathan – Jonathan re-interiated to us about the time back in the summer when he went on a trip and fell ill. The intravenous antibiotics they gave him in the hospital caused his tremors to diminish over a period of time. He was able to stand straight, lock his knees, and hold his head up. Something he had not been able to do in a very long time. Unfortunately, the effect is wearing off and now the problems he had with his gait before falling ill is coming back. Whatever the antibiotic was that the doctors had given him, may just be a lifeline for people suffering from E.T.

Doris – Doris told us that the tremors are getting worse. The medication prescribed by the doctor just exacerbated her condition. She now had a bottle of Primidone that she cannot use.

Judy – This is the first time Judy has attended our E.T. meeting, so a big shout-out welcome to Judy. Yeah!!

Judy told us that she has tremors in her throat, head and neck. She has had them for 35 years and no doctor can help her. It was diagnosed as spasmodic dystonia and Essential Tremors. Kathy went to Google while typing up these minutes, and typed in vocal tremors, one of the listings that came up was voicedoctor.net. In addition, Judy said the tremors are now starting in her hands.

Peter said she got bad advice and knew immediately when she came in and spoke that she had essential tremors in her voice. Also, he told us about a study in Syracuse of octanol and voice tremors. Kathy asked Peter what octanol was and he said it is the 1-Octanol. Google search -Octanols are alcohols with the formula C8H170H. A simple and important member is 1-Octanol, with an unbranched chain of carbons.

Dave – Dave brought in a special pen that he got from a website titled Pen-Again. The pen is made to stabilize your writing when using a pen. Another Google search and located it. Also, it is available as a pencil. You can find it on SmileAmazon and make a donation to TheHopeNet.com at the same time.

Kathy – Kathy brought in a magazine from University of Maryland Baltimore Washington Medical Center and gave it to Peter, with an article about Essential Tremors, listing the names of doctors some of you are already familiar with. She then mentioned another article she saw in the Howard magazine regarding boxing and Parkinson Disease. Unfortunately she did not bring it in. And then she had a question about pets and essential tremors. It seems her 11 year old poodle mix has developed a tremor in her hind leg. Can pets get essential tremors?

Peter said he did not see why not, and suggested she contact University of PA. They have a pet medicine department.

Then, Peter asked Ellie and Judy if they found the information helpful. Both were impressed with the information that was discussed and the helpful suggestions that were given.

Remember no meeting in November, next meeting December 1, 2017.