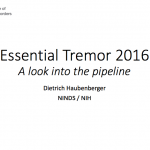 The June 6th Essential Tremor support group meeting at Holy Cross Hospital in Silver Spring, MD brought together close to 50 members of area Essential Tremor support groups from places like Silver Spring and Columbia, Maryland and Loudoun County and Falls Church, Virginia. There were two speakers preceded by remarks by Peter Muller from HopeNet. Muller informed the audience about what happened last month at a conference HopeNet worked to arrange, held at the National Institute of Neurological Disorders and Stroke (NINDS), a part of NIH. Forty neurologists and ET researchers attended the conference. What they agreed on is that treatment for ET is not possible if they do not know what the condition is. ET presents differently in each person, with varying symptoms such as hand tremors, head tremors, voice tremors, etc., and there can be overlap with other conditions such as Dystonia. These experts decided it would be beneficial to use hand tremors as the focal point to pinpoint what ET is, which suggests there will be upcoming studies.

Moving on, the support group audience was fortunate to hear from Dr. Maguire-Zeiss of Georgetown University’s Department of Neurology who gave a brief overview of the mechanisms in the brain thought to be involved in ET such as the cerebellum, motor cortex and thalamus. There is a question about the role the inferior olive plays as well. Maguire-Zeiss focused on neurons and likened the movement of neurons in the brain to an (electric) circuit and pointed out that if there is a “hiccup in the loop,” that can lead to more body movement (as seen in ET) or less body movement (as seen in Parkinson’s Disease).

Another guest speaker was Dr. T. Sean Vasaitis, Professor of Pharmaceutical Sciences at University of MD, Eastern Shore, who has ET himself and is a practitioner and instructor of the Chen style of Tai Chi. Dr. Vasaitis spoke about body control and elaborated on the benefits of Tai Chi such as reducing stress, releasing tension, improved calm, sleep quality and other cognitive functions. He is exploring the idea of a study on the effects Tai Chi can have on ET patients and speculated that starting out there would be a suggested practice of Tai Chi 2-3 times per week.

HopeNet organized this support group meeting and continues to work toward helping people with ET. Another similar meeting of these support groups is likely to be planned for the fall season, and will again be open to other interested individuals.